Today Rutherfurd Hall is a cultural center and museum owned and managed by the Allamuchy Township Board of Education. For ten years it has provided educational and enrichment opportunities for the residents of Allamuchy and the surrounding communities. It is sustained through a combination of public funding, New Jersey Historical Commission grants, Rutherfurd Hall Foundation support, corporate and individual donations, volunteers and event-based fundraising. Additional operating revenues are obtained through an active rental program, public programs for a nominal fee, and other earned-income programs. Rutherfurd Hall is working towards its goal of becoming a self-sustaining enterprise that protects and preserves its historical, cultural and architectural integrity. 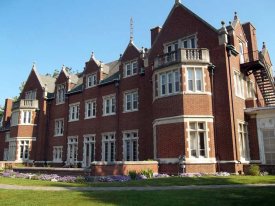 Soon after his marriage to Alice Morton (1879-1917) in February 1902, Winthrop Rutherfurd (1862-1944) asked his close friend famed New York architect Whitney Warren to design for them a summer cottage, Rutherfurd House. The resulting Tudor-style, 18,000 square foot mansion is a notable example of an estate built at the turn of the 20th century representing the Country Place Era (1890-1930.) (For the formal landscape design the Rutherfurd’s chose the premier landscape architects in the country, the Olmsted brothers.) These country retreats, built in settings of great natural beauty, offered an escape for prominent Americans from the noise and pollution of urban centers. Winthrop and Alice Rutherfurd’s advantage was that their setting of great natural beauty had been in the Rutherfurd family for generations.

The Rutherfurd presence in this area of New Jersey dates back to the mid-eighteenth century with the marriage of Walter Rutherfurd, recently arrived from Scotland to fight in the French and Indian War, to Catherine Alexander Parker in 1758. The family’s country residence and landholdings expanded as it passed generationally. By 1906, Winthrop Rutherfurd’s Allamuchy Farms and his brother Rutherfurd Stuyvesant’s neighboring Tranquillity Farms encompassed over 6,000 acres in both Sussex and Warren counties. Guests to the estates included titans of industry, a U.S. President, a former U.S. Vice-President and European royalty.

After the deaths of Winthrop in 1944, and his second wife Lucy Mercer Rutherfurd in 1948, the remaining estate was sold in 1950 to The Congregation of the Daughters of Divine Charity who maintained the property until 2005. It is currently owned by the Allamuchy Township Board of  Education and is listed on both the National and New Jersey State Registers of Historic Places.