We’re back! Rutherfurd Hall is now open Wednesdays 1-4 pm. Reservations for house tours are highly recommended. One and one half-hour tours are at 1:00 and 2:30 pm. At this time masks are welcomed and recommended. Suggested donation of $10 per person.  The first floor is wheelchair accessible. There are stairs to the 2nd and 3rd floors.

For more information or to schedule a tour please contact jsalvas@aes.k12.nj.us.

The 18,000 square foot mansion built between 1903-1905 is one of the last examples of the architecture of the Country Place Era (1890-1930) in New  Jersey. The Tudor-style building with its solid oak doors, ballroom-size drawing-room, marble fireplaces, game room, and bay windows was visited by many of the socially-prominent individuals of the early 20th century. Allamuchy Farms, the 1300-acre estate surrounding the Big House, was renowned for its Holstein cattle, Dorset sheep, and smooth fox terrier kennels known as Warren Kennels. (YouTube video below)

Artifact of the Month

Artifact of the Month
One hundred and twenty years ago, on a cold February 18, 1902, Alice Morton became the bride of Winthrop Chanler Rutherfurd in Grace Church in New York City at 12 noon. Because the wedding took place during Lent, it was a somber affair. The bride carried no flowers, there were no bridesmaids. Nor was there a breakfast or reception afterward.

Rutherfurd Stuyvesant, the bridegroom’s older brother, served as his best man. There were five ushers. Whitney Warren, a good friend of Winthrop’s, was to have served as a sixth usher but was unable to attend the ceremony due to the death of his young niece, Beatrice Goelet.
The afternoon of the wedding Mr. and Mrs. Rutherfurd took Lackawanna train No. 5 to Hackettstown. Before sailing for England, they intended to spend ten days at Tranquillity Farms, the Rutherfurd now Stuyvesant estate which had been in the family for generations. They were met at the station by one of the men from the estate with a team and a two-seated sleigh.

Due to great snow drifts blocking the road, they were forced to ride on top of snowbanks. The sleigh overturned, the harness broke and the horses took off! After a two-hour wait, the coachman returned with a new team and sleigh and the newlyweds completed their 6-mile journey exhausted, cold and shivering. 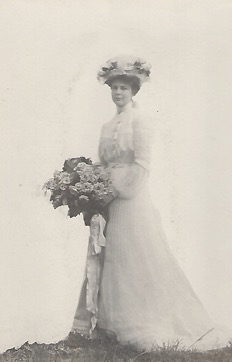